In Quebec[1], social justice exists in a variety of forms within governments, the SSVP and several community organizations… It is true that social security is a form of social justice, but is it sufficient, knowing that “35% of households spend more than 30% of their gross income on rent and 50% of them pay more than 50% of their gross income”?[2] In 1840, Frédéric was saying, “Charity is not enough…” We must add to our Vincentian actions a wider social consciousness of social justice. Our Vincentian mission wants to help people “in all possible ways”.[3]

The Church has the same mission. Since 1891, with a first encyclical on social justice and three others that followed, John Paul II issued in 2004 the Social Doctrine of the Church that summarizes the previous encyclicals.

The national Social Justice Committee, based on the principles of the Church’s social doctrine[4], proposes and adds a new Vincentian orientation, that is the creation, among conferences and particular councils, of a network composed of one representative from each conference and a Social Justice Committee (SJC) in every PC. What could be called a revolution within the SSVP will foster a greater awareness of social concerns and actions required to bring a Christian response.

Such a social engagement goes beyond our Vincentian borders and prompts us to join forces with other organizations in order to identify the causes of poverty and related issues. That requires mobilization, and the new orientation may generate new membership. It will also be necessary to encourage advocacy with government authorities, another new development.

Several programs are available, but they are not necessarily known by beneficiaries. We can help them gaining access to programs by accompanying them in the process. For example, in the field of education, we have the IQEE[5] in Quebec and the RESP[6] in Canada. Awareness of those programs can make quite a difference.

The national Social Justice Committee invites us to become involved, accompanies us in our approach and promotes the network through concrete action. Soon, the Committee will also propose, via the National Board, a “national action campaign” on a major theme that will be relevant, as well, in our regions. The final decision with regard to the theme will be made at the national AGA of June 2019, in Windsor. The campaign will be a “wonderful project” and a “great challenge”, but we are not alone, and I bet that we will be talking about social housing.

Here is an example of collaboration that will help expand our network. The Montréal Archdiocese has had in place for the past 20 years a social justice department called the Social Action Ministry Office. Mrs. Louise Royer is presently Director and she works with 7 pastoral social action agents, who work in several Montréal neighbourhoods, including one in Laval. Among other objectives, the office aims to “(…) heighten awareness among the baptized of the social action dimension of faith, and to rally the People of God around structuring projects that reflect the principles of the Church’s social (…)”[7] That is precisely what the SSVP Social Justice Committee proposes.

A meeting with Mrs. Royer allowed us to initiate a collaboration process between our conferences and her team to create bonds, eventually leading to uniting our mutual skills in favour of beneficiaries and the well-being of society. It is a promising collaboration that already brings a breeze of fresh air, a breath of hope. Building bridges with Christian and non-Christian organizations will help meet existing needs more efficiently and improve our Christian approach. Such collaboration is precious, it is an invitation to all.

Here is a diagram illustrating our collaboration. 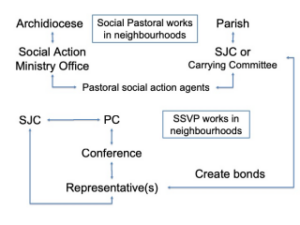 [1] There are 13 different social welfare programs in Canada, on in each province and territory.

[3] The mission of the SSVP